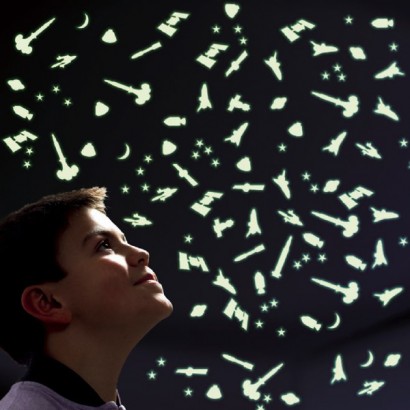 Turn your child's room into a universe of glowing stars, shuttles and satellites with Glow Spacecraft Stickers. Self adhesive glow in the dark stickers with a spacecraft theme ar eperfect for kids bedrooms. Read more...

A fun way to decorate a child's bedroom, this pack of Glow Spacecraft Stickers contains rockets, shuttles, satellites and flying saucers alongside moons and stars so that you can make a glowing universe on walls or ceilings. A pack of approximately 120 glow in the dark stickers, they appear off white in the daytime and so will blend into white ceilings and walls but come to life with a vibrant green glow when you turn out the lights.